You may consider the trampoline as a fairly modern invention but that’s not the truth. Rather first modern trampoline was built in 1936 and the idea of jumping and bouncing on a surface was practiced even in 1922. In short, the trampoline has a fascinating history that every trampoline lover would like to know.

Promotional Offer!
Most Frequently Asked 1000 Trampoline Questions & Answers (eBook by simpletrampoline.com)
Best handbook for trampoline lovers
A lifetime resource on trampolines
Will save 100’s of hours of effort
Will get expert’s opinion
Get it now before heavily spending on a trampoline
9.99
Buy Now
Know More
This promotional offer will end soon! Order Now.

Since we are also trampoline lovers like you, we have tried to dive deep into the history of trampolines and know some amazing facts. In this article, we are going to introduce you to some of those trampoline history facts.

While studying the trampoline history facts, we discover that trampoline-like devices were familiar even a hundred years ago. The main theme behind the trampoline is jumping on a surface that provides some good bouncing effects from those trampolines.

Inuit meaning “the people” is the plural form of Inuk. Inuit people inhabit the arctic regions of Greenland, Canada, and Alaska. They have formed a game named Blanket Tossing. In this game, a group of thirty or more people stand in a circular way and hold the edge of large circular walrus skin.

And then one person will climb on top of the skin surface while others will push in on the skin and then pull the skin taut. As a result, the climbing person will literally fly in the air. The trampoline game is really full of fun and excitement.

If the flying person falls to land on his feet, his turn is over. And the next person gets the chance to fly in the air. The game is played on the occasion of various festivals and celebrations like spring celebration of whale harvest etc. The first date of playing this game or who is the inventor, history can’t say surely. But we can assure you that, this game has been played since before 1900.

Browder Life Safety Net or Jumping Sheet was invented in 1887 and was used during several fires in the 20th Century. This life net was used under proper conditions and allowed people to form upper floors of burning buildings to jump and become safe. And this net and technique saved many lives and gained huge popularity. Later with the advance of firefighting technology, the use of this safety net became obsolete by the 1980s.

Other Formats of Trampoline

Before the invention of the modern trampoline, there was some similar use of modern trampoline with a different setup. Like in Pablo Fanque’s Circus Royal, there was a performance on a springboard that resembles jumping on the trampoline. In the early years of the 20th Century, acrobats used something called “bouncing bed” on the stage to entertain people.

When Was the Trampoline Invented

The credit for a modern trampoline goes to George Peter Nissen, an American gymnast, and inventor. The main idea and even the name trampoline came to his mind in 1930. Since then he was continuously trying to develop a workable prototype of a trampoline. And finally, Nissen along with his coach Larry Griswold built the first viable prototype of trampoline in 1934 using angle iron, canvas bed, and rubber springs. So in short, the modern trampoline was invented in 1934.

A Little Bit about George Nissen

Nissen was born in Blairstown, Iowa. He was really gifted in gymnasts and was a keen gymnast from high school. He won three NCAA gymnastics championships while he was a student at Iowa University. He has seen trapeze artists performing and using the safety net as an elastic bed to rebound and perform amazing tricks.

He considered that net as a potential tool for his tumbling. Although, there are some negative side effects of a rebounder. But, you can take precautions for that.

The idea of the trampoline came to Nissen’s mind from the safety net used by trapeze artists for rebounding. And the name trampoline came from the Spanish term “trampolín”, which means diving board. Nissen heard the word on a demonstration tour in Mexico in the late 1930s. The first prototype was built by Nissen and his coach Larry Griswold in 1936. Nissen used it to train and entertain kids at summer camp.

After graduating in 1937 he went on an exhibition tour in Mexico. After finalizing the name of his tumbling gear, he trademarked the name “Trampoline”. He then built a few trampolines and promoted them by touring performances. His promotion did really well and sales increased gradually. In 1941, he and Griswold formed the “Griswold-Nissen Trampoline and Tumbling Company” in Iowa.

A Journey for the Trampoline

After World War II Nissen continued his journey to promote the trampoline and started touring in Europe and later in the Soviet Union. In 1956 he set up a manufacturing plant for his company in England with another trampoline pioneer Ted Blake. Trampoline manufacturing was quite successful for several years. But by the late 1970s, other trampoline brands started making similar products and the trademarked word “trampoline” became a generic word for rebounding apparatus. Finally, Nissen’s company ceased operations in 1980.

Nissen continued his journey to influence gymnastics and trampolining until his death. He had always dreamt to have trampolining included in the Olympic games. His long-cherished dream came true in the 2000 Summer Olympics in Sydney. 86 years old, Nissen attended that Olympics with his daughter Dian Nissen. Next, he attended the Beijing Olympics in 2008 with Dian and his grandson. He was honored by a request to test the Olympic trampoline before the event. And finally, this nobleman died in 2010 at the age of 96 with a very meaningful life.

Evolution of the Application of Trampolines

Though the trampoline was designed from the idea of gymnastics and its targeted audience was mainly the performers and children. Yet we find some less conventional applications of trampolines.

You may wonder how come trampoline is related to wars. Yes, that’s true. During World War II, the United States Navy Flight School adopted the use of trampolines in the training modules of pilots and navigators. They did this to allow the trainees for concentrated practice in a spatial orientation which was not possible before. This practice allowed the pilots to master necessary turns and flips during the time of necessity and eliminate the fear of heights. Additionally, it strengthened their muscles and improved body control greatly.

A young pilot, Scott Carpenter went under trampoline training during World War II. At the end of the war, he was introduced to Nissen. They both were from the navy and had a great bond. Together, they helped to introduce the trampoline into space training at NASA. Out of great enthusiasm, they formed a game named Spaceball which is referred to as the “best conditioning exercise for space travel”.

In this game, two people would face off on a three-sided trampoline. In the middle, there will be a frame with a hole. The competitors will bounce and try to throw the ball through the hole. The other one has to stop the ball to stop the component from scoring a point.

Trampolines in the Olympics

These were some of the trampoline history facts, we are really happy to share with you. We are quite sure that genuine trampoline lovers will be surprised to know those facts. It is a great habit to know the behind stories of our favorite things. We hope you are really delighted after going through the facts.

Adam is a family guy who tries to find joy by having a good time with his friends and family. Spending some quality time in his backyard and have a good trampoline moment is something he loves dearly. The sharing of experience and knowledge that he got has motivated him to start this blog.

How to Clean a Trampoline: A Definite Guideline!

15 Best Trampoline Parks in The World!

What Time Does The Trampoline Park Close?

How Much Is Altitude Trampoline Park: Top 5 Options For You!

We will be happy to hear your thoughts 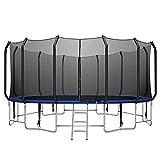 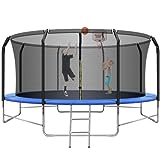